A Breath of Seduction 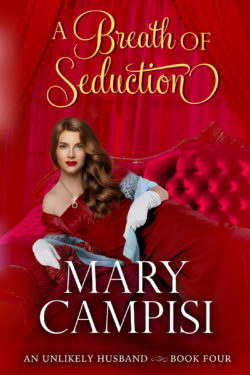 Readers who have followed the An Unlikely Husband series have only seen Holt Langford and his wife, Sophie, as the model couple: married, in love, sharing their hearts and dreams. However, there was a time when they didn’t share much of anything…and certainly not plans for a life together. You won’t want to miss this tale of scandal and seduction as the Earl of Westover falls for the daughter of his family’s sworn enemy. It’s going to be a hard fall, fraught with denial, hurt, and revenge, yet the ultimate gift will be love, hope, and enough dreams to fill an earldom.

A Breath of Seduction was previously published as The Seduction of Sophie Seacrest.

When Holt Langford, the new Earl of Westover, returns to England after twelve years at sea, he resembles more pirate than nobleman, a far cry from the scrawny youth whose father shipped off to become a man. No one recognizes him, and he’ll use this anonymity to enter a game of subterfuge in order to expose the scoundrel who has vowed to destroy Holt’s family business.

Unfortunately, that scoundrel has a devoted daughter, Sophie Seacrest. Sophie can’t deny her attraction to the unorthodox stranger who stirs her blood and makes her think things no proper lady should. Holt and Sophie are drawn into a seductive tangle and just when he’s about to reveal his true identity and his honorable intentions, she discovers the truth and must choose between love and family duty.