A Touch of Seduction 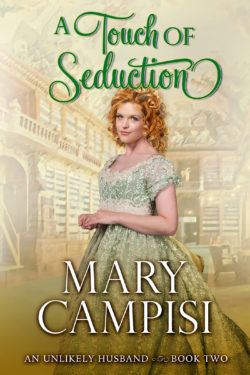 He was the second son of an earl.

She was the daughter of a vicar.

They were young, in love, and believed nothing could keep them apart…

Oh, but they were so very wrong.

Jason Langford fell in love with Ariana Kendrick the first time he saw her. It didn’t matter that she was but a vicar’s daughter and he was the second son of an earl. Nothing mattered but their love and the future they planned as husband and wife.

But those dreams were torn apart one fall afternoon—swiftly, painfully, tragically.

They’ll be caught in a tangle of lies, deceit, and intrigue. Where has she been all these years, when Jason thought her dead? Why is she using a name other than her own? Is she truly a widow? When she and her son are rescued walking along a road, why does she have no traveling cases? No carriage? Not even a coat? And the boy she insists is not his son? Is that yet another lie?

It will take great effort to untangle the truth from the lies, but Jason is determined to learn what really happened to the woman he loved, the one he could never forget…and never stopped loving…