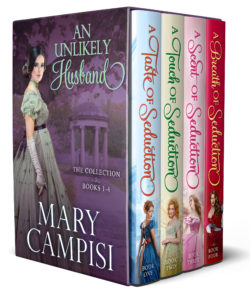 BONUS: Included with this e-book is an excerpt from A Dash of Seduction, Book 5 in this series.

A Taste of Seduction

A young woman of noble blood, raised as a peasant girl…
An orphaned stable boy, now grown and the surrogate son of a powerful earl—the same earl who just so happens to be the young woman’s father…

Francie Jordan and Alexander Bishop have nothing in common—she runs barefoot and talks to animals. He won’t loosen his cravat unless the bedroom door is firmly closed. She believes in love, second chances, and happily ever after. He believes in keeping a safe distance from anything that resembles an emotion. Indeed, they have nothing in common but an undeniable desire for one another they can’t ignore, and an ailing “father” who will employ any means to bring them together.

Unfortunately, not everyone wishes to see a union between Francie and Alexander, and they will stop at nothing to keep this couple apart.

A Touch of Seduction: a Novella

Jason Langford fell in love with Ariana Kendrick the first time he saw her. It didn’t matter that she was but a vicar’s daughter and he was the second son of an earl. Nothing mattered but their love and the future they planned as husband and wife. But those dreams were torn apart one fall afternoon—swiftly, painfully, tragically.

Nine years later, Jason and Ariana will meet again. They’ll be caught in a tangle of lies, deceit, and intrigue. Where has she been all these years, when Jason thought her dead? Why is she using a name other than her own? Is she truly a widow? When she and her son are rescued walking along a road, why does she have no traveling cases? No carriage? Not even a coat? And the boy she insists is not his son? Is that yet another lie?

It will take great effort to untangle the truth from the lies, but Jason is determined to learn what really happened to the woman he loved, the one he could never forget…and never stopped loving…

A Scent of Seduction

English noblewoman, Julia Langford wants nothing more than to escape the constraints of a society that demands she turn in her breeches and secure a husband. She cares nothing about men or love until she encounters daring sea captain, Jon Remmington, a man who steals her heart and her innocence with searing kisses and bold touches.

Jon Remmington sails the sea avoiding anything that resembles commitment—until he meets the golden-haired temptress with a will to match his own. One night of passion binds them together, but a debt of honor forces Jon to abandon his bride. When he discovers Julia is caught in a dangerous game of intrigue, Jon devises a secret plan to return to her side where he will risk his life to protect her and earn the chance to rekindle the greatest love either has ever known.

A Breath of Seduction

Readers who have followed the An Unlikely Husband series have only seen Holt Langford and his wife, Sophie, as the model couple: married, in love, sharing their hearts and dreams. However, there was a time when they didn’t share much of anything…and certainly not plans for a life together. You won’t want to miss this tale of scandal and seduction as the Earl of Westover falls for the daughter of his family’s sworn enemy. It’s going to be a hard fall, fraught with denial, hurt, and revenge, yet the ultimate gift will be love, hope, and enough dreams to fill an earldom.

A Breath of Seduction was previously published as The Seduction of Sophie Seacrest.