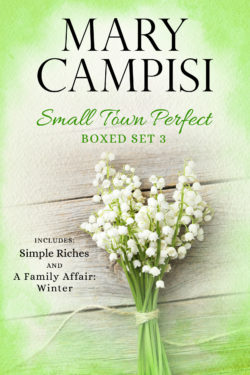 I love secondary characters: writing them, reading about them, even watching them on the big screen. Secondary characters support the “stars”; make them more vibrant and compelling. But when the story ends, I’m often left wondering what they’d do if they were in the “spotlight”. That’s why I’ve created special boxed sets that were part of That Second Chance series and the Truth in Lies series. These boxed sets let the reader follow the before and after of select characters as they first appear in That Second Chance series and later in the fictional town of my bestselling Truth in Lies series. Boxed Set Three contains Simple Riches and A Family Affair: Winter. I invite you to follow their journey!

Alexandra “Alex” Chamberlain is a big city girl who knows nothing about close-knit families, sibling rivalry, or receiving an unsolicited opinion in the name of family. She’s been raised by an aunt and uncle who’ve provided her with a wealthy lifestyle and a fancy education, but have withheld what she craved most—love and acceptance. Her uncle has taught her to disregard everything but the bottom line on a balance sheet and she’ll do anything to earn his approval. She prides herself on excelling at her job which is selecting small towns to buy, flatten, and replace with luxury resorts. When Alex decides to investigate Restalline, Pennsylvania, as a potential site for the next resort, she enters the town under the guise of a researcher gathering information for a documentary. Her uncle wants this project badly, and she’s not going to disappoint him.

This town should be like all the others. Only it isn’t. This town has the Androviches, a family who values hard work, honesty, and doing the right thing. And this town has Nick Androvich, the town doctor with a battered heart who doesn’t quite trust her, but can’t deny the mutual attraction.

Oh, but it’s going to get messy when the truth about Alex’s real purpose for being in Restalline sneaks out…and the truth always does. But fear not, the town is not going to sit by quietly and watch this meant-to-be-together couple lose their happily ever after…

Michael Androvich and Elise Pentani should have been married and working on their “happily-ever-after” but fate intervened and stole their chance. Can the residents of Magdalena help them get it back and give them a second chance?

On the day Michael stands at the altar before family, friends, and most of the town of Restalline, Pennsylvania, he’s prepared to pledge his life, love, and fidelity to the woman who owns his heart. There’s only one thing missing—the bride.

Elise loves Michael truly and completely, but there’s a tiny piece of her that believes he’ll fall back into his “bad boy” ways. When a threat from his past visits her, Elise lets doubt rule and skips her own wedding.

Nursing a broken heart and determined to forget the woman he can’t forget, Michael heads to Magdalena, New York, to secure a business deal for his family’s lumber company. He’s not prepared for the endless questions and inquisitive nature of the residents who remind him an awful lot of his hometown.

Just when Michael has gotten the town to accept the fact that he’s not talking about his past or the reason for his surly disposition, his ex-fiancée shows up with an apology he doesn’t want to hear and certainly doesn’t want to believe. So much for the town leaving him alone; everybody has an opinion and they’re all more than anxious to share it.

There’s no way the residents of Magdalena can ignore these two broken-hearted souls. Michael and Elise have “need help” and “belong together” stamped all over their sad faces. Add that to Pop Benito’s determined matchmaking skills and Lily Desantro’s clever curiosity, and this couple might just get that second chance…