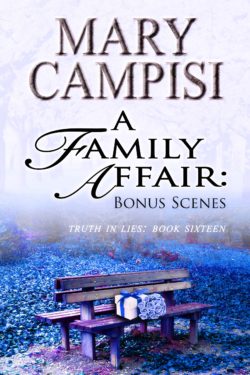 I love reading bonus scenes or watching bonus clips on television. If someone told me I could read about or watch Mr. Darcy and Elizabeth Bennet get married, I would be beyond excited. Imagination is great, but there are times when I don’t want to imagine or guess—I want to know! I even want to know when storylines change and what might have been… That’s why I’m providing bonus scenes and extras from several of the A Family Affair books. I loved writing these scenes and now I want to share them with you. Enjoy!

Wouldn’t you like to know what Nate Desantro was thinking right before he married Christine? For a man of few words, there was a lot going on in his head. And how about discovering Harry Blacksworth’s thoughts as he prepares to give Christine away? That’s definitely one you won’t want to miss. Lily is still one of my favorites and she’ll warm your heart with her innocent and yet spot-on observations about the wedding, life, and love in Magdalena.

Always a Heartbeat Away – A Family Affair: Summer

I started A Family Affair: Summer several times as I tried to get a feel for Tess and her backstory. I knew it would involve heartache, just as I knew that deep down, she still loved Cash. But the rest? I wanted to find a way to take her as far from the life she thought she’d have as possible. Initially, that involved a calm, quiet man and a dog named Henry. That storyline changed and I decided not to use it, but it’s a great bonus scene to let you see the possibilities, maybe even wonder how the story might have been different.

Who is Sasha Rishkov? – A Family Affair: The Secret

What if Angie Sorrento’s father turns up in Magdalena to visit his daughter and risks running into the only woman he’s ever loved, Angie’s mother, the one she thought died years ago? He’ll come so close to discovering the truth…

The Future Godfather – A Family Affair: The Wish

This is a conversation you won’t want to miss! Pop tells Harry that when the time comes, Harry will be the new Godfather of Magdalena, and he’ll make a darn good one. Of course, Harry doesn’t agree…

When Harry meets Stephanie – A Family Affair: The Gift

Harry Blacksworth is nobody’s fool and while he might once have been the playboy-good-for-nothing-younger brother of Charles, he’s come into his own as a well-respected and generous member of Magdalena’s community. When Cash and Tess hit a roadblock named Stephanie Richmond, Harry’s not going to let anything jeopardize their happiness. Don’t miss When Harry Meets Stephanie and read firsthand how he deals with the woman who thinks she can leverage a child to gain security.

The Real Stephanie Richmond – A Family Affair: The Gift

And because first drafts and ideas change, I’m including a scene I once considered using for the storyline. In this version, Stephanie isn’t soft and guileless as she appears in the final version of the book, but straightforward and intent on letting Cash know exactly what she wants. While I like the final outcome, this is still an interesting read and portrays Stephanie Richmond’s true personality.

Who’s in the Cabin? – A Family Affair: The Cabin

Nate and Christine Desantro head to the cabin one last time before they sell it and discover an uninvited guest! Elissa Cerdi has snuck away to the Blacksworth’s cabin for quiet and a chance to consider her future with or without a controlling ex-boyfriend. Her innocent and trusting ways prevent her from seeing that she’s put herself in danger by choosing a secluded cabin. Of course, Nate and Christine aren’t about to risk her safety, even if she was Gloria Blacksworth’s friend and confidante!