A Family Affair: The Return 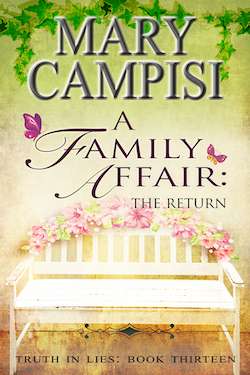 Heartache. Betrayal. Forgiveness. Redemption…The saga continues.  You won’t want to miss this one!

Grace Romano had been seventeen, impressionable, innocent to the power of attraction and
desire.

Max Ruhland taught her about both. But Grace was a lot more than a summer fling. He loved
her, thought they had a future together, until she crushed his heart and told him he wasn’t part of
her life-plan.

Twenty-two years later, Grace Romano Clarke is a widow with two children and a pile of
broken dreams. When her aunt dies, she must return to Magdalena, the town she’d rather forget,
to honor the woman’s last wishes: stay in her house for thirty days, and complete a list which
according to her aunt will reveal a bit about life and maybe reveal something about herself, too.
What Grace doesn’t know, but will find out soon enough is that Max Ruhland must stay in the
house with her and help complete the list!

Max Ruhland isn’t the same lovesick-puppy from the wrong side of the tracks who had his
heart broken all those years ago. He’s a wealthy, successful businessman who owes his good
fortune to Grace’s aunt, the woman who never gave up on him. Max can have any woman he
wants, but he’s never forgotten Grace, or how she hurt him. Now he’ll have to spend the next
thirty days with her—in close quarters—to honor her aunt’s last wishes, and he’s not looking
forward to it.

It’s going to get very interesting as the town watches and wonders what’s going on between
those two. Of course, Pop Benito understands exactly what’s happening in the house on
Bayberry Street, even if Max and Grace don’t. He’s the one who helped Grace’s aunt create the
thirty-day list, which he insists will finally get this couple their happily-ever- after!

Are you wondering how Pete Finnegan and Elissa Cerdi’s Christmas wedding plans are
progressing? Well, they aren’t progressing. Seems some people in town can’t forgive Elissa for
partnering with Gloria Blacksworth, and they’re determined to gouge her reputation. Plus, Elissa
is suffering from a case of mistrust every time a woman talks to her fiancé, and that’s driving
Pete crazy. They better figure things out quick, or Elissa won’t be walking down the aisle…