A Family Affair: The Choice 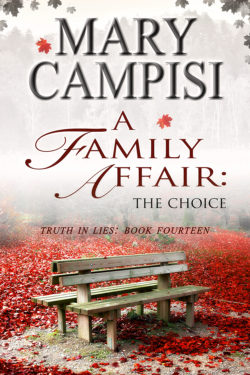 If Ben Reed could have guessed at the event that would hurl him into danger and set off a chain reaction that threatened his marriage, his family, his health, andhis future in Magdalena, he would not have said it would occur at home. For a man who’d served his country, chased bad guys, and thrust himself into the middle of danger more often than not, his house was his safe haven, not a battle zone.

And maybe that’s why Ben never saw the accident coming.

As a physical therapist, Gina knows the toll a long rehabilitation can take on a person, anda relationship. Her husband’s perpetual moodiness, sullen attitude, and refusal to continue therapy create a battleground that’s about to explode. In desperation, Gina turns to the new physical therapist in town who’s been dubbed the Angel of Hope and Healing.

For a busted-up and beaten-down guy who questions his worth and ability to be what he once was, the beautiful physical therapist is just the balm he needs to assure him he can have anythinghe wants. By the time Ben realizes the woman’s interested in more than his recovery, a scandal erupts that makes Gina believe he’s betrayed her.

Now, Ben must win back his wife’s trust or risk the greatest heartache of all—a life without her. Of course, he’s going to need help, and isn’t offering guidance and help Magdalena’s specialty?

P.S.  Did you know Harry’s going to rescue a dog? Oh, you won’t want to miss this one! I like to think of it as The rescued rescues a rescue.