A Family Affair: The Proposal 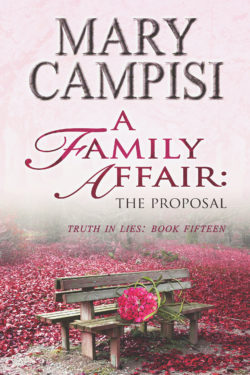 It was only supposed to be a simple arrangement—until emotions got in the way. Now lies and secrets could destroy everything.

Lawson Carlisle, the ostracized black sheep of the wealthy Carlisle family, is back in Magdalena. It’s been sixteen years since he left, vanishing one night amidst speculations that included detention homes and jail time. Those were serious claims against one of the wealthiest families in town, and whether those stories were true or not, they fueled many a conversation and served as a lesson to the community: no person is invincible, no matter how much money his family has.

Ava Marie Ventori used to believe that doing good and following rules would gift her with the life she wanted, the man she loved, the dreams she didn’t even know she craved. But her eagerness to find that perfect life landed her with the wrong man, the wrong career path, and the wrong dreams. At thirty-three, the jobs are meaningless, the relationships nonexistent, and the dreams are gone. Her one joy is painting river rocks with inspirational messages, but she’s not about to share their existence, especially with the parents she continues to disappoint.

After a chance encounter with former classmate, good-girl Ava Marie Ventori, Law offers her the use of his cabin—no strings attached—so she can work on the mystery art she obviously doesn’t want to share. But his “no strings” good intentions are no match for old-fashioned attraction… As Law and Ava spend time together, she discovers there’s so much more to the former bad boy than a questionable past and he starts to believe that maybe Ava isn’t too good for him. In fact, maybe she’s perfect for him.

When lies and old secrets threaten the couple’s happiness, will their love be strong enough to fight for a life together?