A Family Affair: The Homecoming 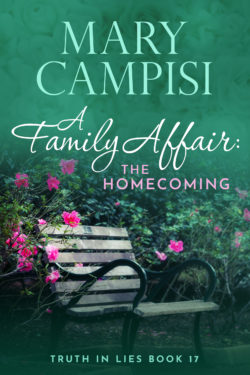 Delilah O’Reilly and Nicholas Borado fell in love, married, and planned to spend a life together full of dreams, joy, and endless possibilities… until lies and betrayal tore them apart.

Delilah O’Reilly may have grown up in a small town, but there’s nothing small town about her. She’s the media genius of celebrity interviews and has the television show to prove it. Smart, confident, and in control, no one would ever guess that deep inside there’s a lonely girl with a sad past, one that includes a family secret and a man she’s never forgotten. When an on-air disaster explodes her career, she seeks refuge in the one place she swore she’d never return to—Magdalena, New York—her hometown.

Nick Borado was born to a life of wealth and privilege. As heir to a high-end men’s clothing dynasty, he’s always gotten what he wanted…and he wanted Delilah O’Reilly. When she betrays him, he spends years running from that pain, losing himself in reckless behavior and close calls. After a near-fatal miss, he realizes something has to change and heads to the small town sheonce told him could make a person invisible. Four months later, he’s still in Magdalena working at O’Reilly’s Bar & Grille and trying to figure out his life. Of course, the town thinks he’s just a bartender living paycheck to paycheck…

Six years have passed since Delilah and Nick saw each other, but they’ll meet up again in a most unlikely place—Magdalena, New York, Delilah’s hometown. Hurt and accusations will resurface, but they won’t stop the sparks from flying, or the town from wondering about this couple’s secret past…wondering too if Delilah and Nick might just have a chance for a future together…