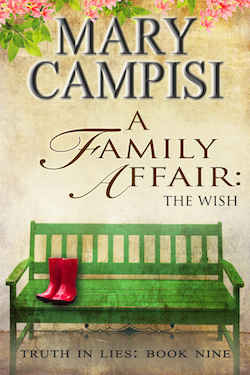 Bree Kinkaid is finally going to get her happily-ever-after with Adam Brandon (from Paradise Found, That Second Chance series), but it’s not going to be quick or easy. You won’t want to miss the fireworks as one of Magdalena’s favorites meets Mr. West Coast. Should I mention he’s handsome, intelligent, wealthy, and an all-around good guy? (Oh, but he has a broken heart…forgot about that.) Guess that makes him a wounded hero in need of a second chance, and we all know Magdalena’s just the place for second chances.

And I know many of you have no time or patience for the “bad girl” of Magdalena, Natalie Servetti. She’s done her share of wrong and worse than wrong, including almost breaking up Nate and Christine Desantro. But those of you who read A Family Affair: The Secret know she’s trying to right her past misdeeds, and now she’s met a man who might just give her a chance at happily-ever-after. But will her past destroy that chance or will love indeed conquer all?